Kiki Smith: an artist at the top of her game 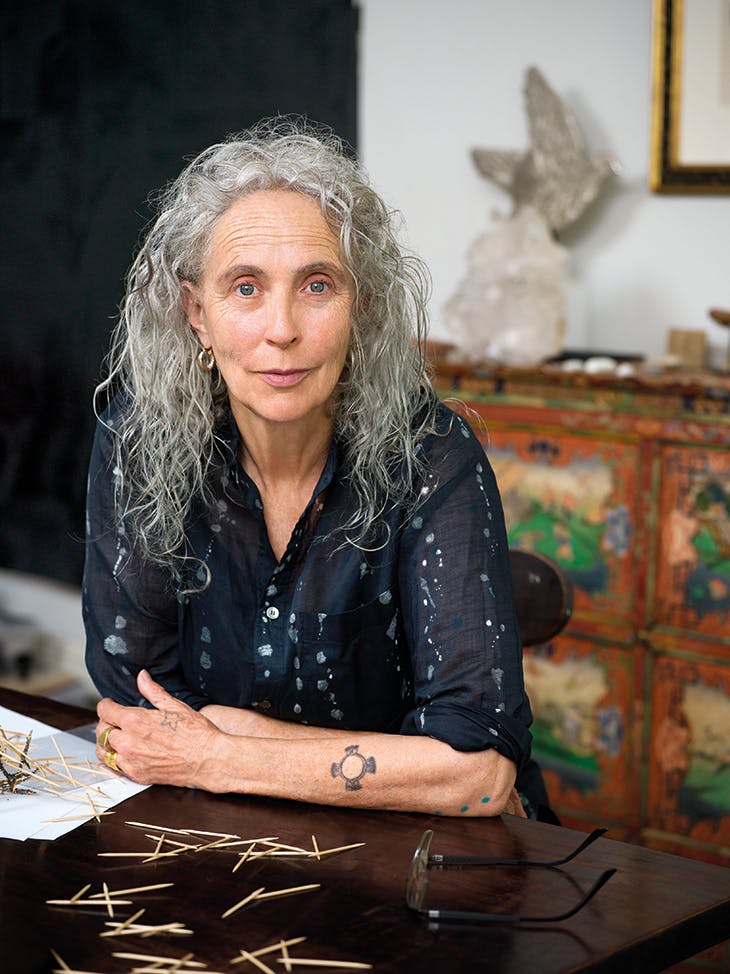 Kiki Smith is a New York-based artist whose oeuvre moves from photographs, to drawings, to printmaking to small sculptures and most impressively since 2012 to large scale tapestries. If you want to see the work of an American artist at the top of her game, then make a date to visit Kiki Smith: I am a Wanderer retrospective at the Modern Art Oxford gallery (MAO). Smith’s first solo UK exhibition for 20 years includes works in a variety of materials and scales: bronze, glass, porcelain, metals both precious and non-precious.

MAO is in a converted brewery building on an Oxford backstreet and has been a significant venue for contemporary art shows since it opened in the late 1960s (then known as MoMA Oxford). The Piper Gallery displays a range of Smith’s printmaking. Often inspired by fairytales and folklore, Pool of Tears 11, 2000 shows Alice, as in Lewis Carroll’s Alice in Wonderland, submerged in water followed by a group of animals and birds. There are small sculptures in glass cases and the larger, white porcelain Me in a Corner is a girlish seated figure with flowing locks that could be a hybrid Alice/self-portrait/ Kiki in Wonderland.

Me in a Corner

The Upper gallery, a high ceiling industrial space with white painted brick walls, is hung with her splendid tapestries produced since 2012. Inspired by medieval tapestries these are of striking originality and beauty. The dozen of these cotton jacquard were produced on digital looms in Belgium.  ‘My original intent in making tapestries was to mix up the Middle Ages and the Roaring Twenties and hippy art to make images that were spectacle,’ Smith has said. Her themes cover the natural world and the cosmos and feature a range of elegantly depicted animals: deer, rabbits, wolves, eagles, other birds plus the insect world of moths and butterflies and bees. There are rocky outcroppings and skies full of stars. There is an intermingling of female and male bodies with animals that one finds elsewhere in her work.

The rich texture and beautiful details of the tapestries grew out of their production. Full size designs, based on her drawings and lithographs, were then collaged together. These were then scanned and woven. As she remarked, ‘they are made on a Jacquard loom, but they require a lot of technical and computer innovation.’ I think these beautiful wall-hangings bearing titles such as Earth, Sky, Congregation and Cathedral really represent the coming together of her prints and small sculptures. They are outstanding and totally original.

On the MAO website is an opportunity to take a virtual tour of the Kiki Smith exhibition. Finally, this type of armchair gallery going has reached the point where it is really effective. One can move around the three gallery spaces in turn zooming in on the artworks, with helpful pop-up labelling. I highly recommend this. Better still get there in person to see the work of this distinguished artist. You won’t be disappointed.

Kiki Smith: I am a Wanderer is on until 19 January 2020 (admission is free). And if you’re heading across the channel, there’s another exhibition of Smith’s work at the beautiful Monnaie de Paris institution on the banks of the River Seine (Alyson has been and can highly recommend it).

Kiki Smith is a New York-based artist whose oeuvre moves from photographs, to drawings, to printmaking to small sculptures and most impressively since 2012 to large scale tapestries. If you want to se…