The best part of writing Style Forever was interviewing all the industry experts and Inspirational Women. And for a while now I’ve been thinking I should continue this series on That’s Not My Age. Here’s the first in what I hope (time permitting) will become a regular feature:

Knitwear designer Jo Gordon is about to celebrate 20 years in business. The 48-year-old continues to manufacture her products in the UK, mostly in Scotland, using skilled craftspeople and local mills. Steadfastly sticking to her singular, often stripy, vision she uses colour and pattern to create outstanding accessories. As well as her own website, Gordon sells at Dover Street Market and Barney’s in New York, Liberty in London and is big in Japan.

Gordon puts the success of her small, independent business down to always working with nice people, ‘I really like making in Scotland, there’s a huge skill there, a history. I’ve worked with the same mill for 20 years and have struck up a good relationship. I know everyone and what their skills are, they are lovely people.’ When we meet in the studio, in her south London home, Jo is practising what she preaches, busily handing out crunchy homemade biscuits and freshly brewed coffee. The latest collection has just arrived, and the knitwear designer admits that she feels sick at the thought of opening the boxes, ‘I find it terrifying. When you’ve designed a new collection, you have it in your head and 99% of the time things turn out as you’ve envisaged, but at this time of the year, there’s very little leeway to remake or redo. Though that’s just me, doubting me. Generally things are fine.’

Jo’s dad’s worn out/darned to death hat (in the frame at the back).

Her knitwear company may have been going for two decades, but Gordon’s knitspiration came much earlier, when at the age of 16, her dad’s favourite woolly hat – one that he found on a barge as a teenager himself – fell into holes. ‘I used to darn it for him but there was more darn than hat left.’ The entrepreneurial teenager commissioned her mum’s friend Vilma to make a successful replacement; Vilma was soon helping Gordon with her knitting homework (knitting was on the curriculum when Jo was growing up in West Stirlingshire, Scotland) and over 30-years later, still knits for her today. Making diagonal scarves and headscarves from her home:

One thing I am interested to find out is how Gordon works out her different colour combinations, ‘I have lots of recipes in my head. It’s like a creative affliction!’ she says, ‘I know what kind of blue goes with what kind of yellow but this can change. My mum was a painter and talked a lot about colour, it obviously sank in.’

The Jo Gordon team – part-time administrative/production assistant Sarah and a freelance designer Katy – are continually researching and developing new products and for the first time ever, in 2016, the collection will include items that aren’t made in the UK. Chunky wool jumpers from Iceland and fine knit geometric socks from France are still at sample stage but Gordon is committed to keeping production as local as possible,’I would never go to China or the Far East, I love being able to nip up to Scotland to visit the mill; and one of my knitters in Nottingham drives the knitwear down for me and we have a cup of tea together. I am primarily concerned with people getting paid properly for what they do and knowing that they are working in a nice environment.’ 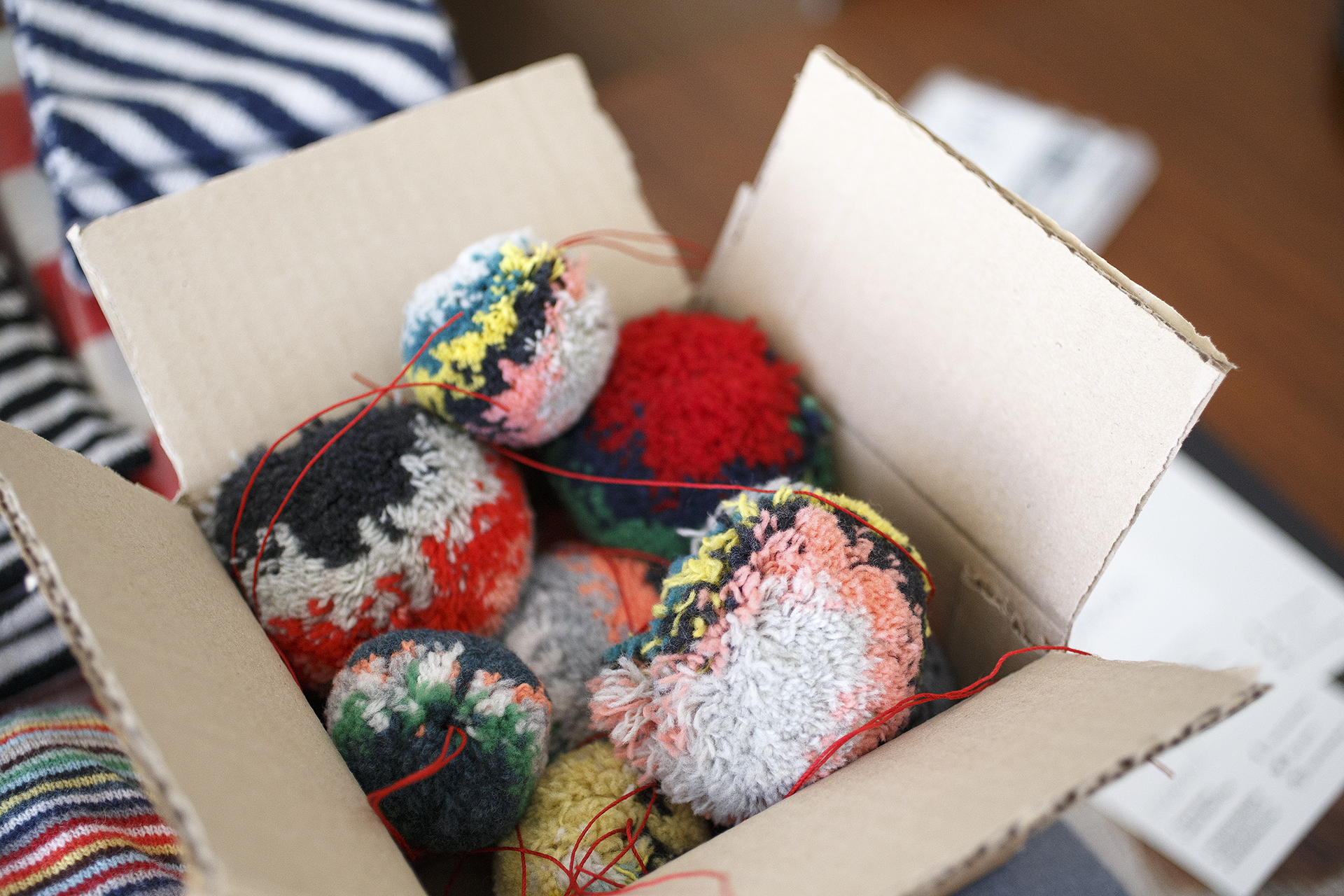 The plain white walls in Gordon’s beautiful house are sparingly decorated with multi-coloured paintings and prints; and the designer takes the same approach to her own wardrobe, ‘I tend to wear fairly dark neutral clothes but will always wear my bright knitwear. The dark neutral outfit sets off the bright knitwear.’

When I ask Gordon for a style tip, as well as telling me that she’s been taking advice on how to pose for a photograph, without getting a double chin, from her Instagram-loving 15-year-old daughter, she advises,’ Only wear clothes that make you feel great. I only buy an item of clothing if I immediately feel fantastic when I try it on.’

As a special Christmas gift to That’s Not My Age readers, Jo Gordon is offering 20% off all items bought up until December 22nd. Simply use the offer code ‘TNMA’ when you check out at jogordon.com

And as an extra-special Christmas gift, there’s a picture of me in an old Jo Gordon hat HERE (scroll down).

Quote of the week: Lily Tomlin in Grandma

The best part of writing Style Forever was interviewing all the industry experts and Inspirational Women. And for a while now I’ve been thinking I should continue this series on That’s Not…